A ferry was first recorded at this site in 1323. The decision to close the ferry and build this bridge was due to increased running costs. The footbridge cost £43,500 to build and was officially opened by Sir Tatton Brinton MP on 22nd January 1972

Twice as long as the Iron Bridge, when built it was the largest cast iron bridge ever constructed. In 1979 the bridge was repaired at a cost of £94,346 and is in use today by the preserved line of the Severn Valley Railway.

Built to carry water across the River Severn from the Elan Valley to Birmingham.

1447 was the year that the first bridge was built on this site. It was destroyed 12 years later in the War of the Roses and the stones taken to Worcester to repair their bridge. The present bridge cost £11,000 to build.

The first Stourport Bridge had three stone arches and was completed in 1775. During the floods of 1794 two arches collapsed. In 1806 a new bridge was built. This one was demolished in 1870 and replaced by the current one.

Before the bridge was built this was the site of a ferry and ford. The last bridge in the county to have a toll on it which ceased in 1900. The bridge was widened in 1928.

Built in the same year as Bevere Lock. Before construction of the lock and weir the river was quite shallow here and it was possible to wade through the water to get to the island.

Built by Morrison Shand Construction Ltd to a cable stay design of 120 tonnes weight with an “A” frame of 20 metres height.

Built for the Hereford & Worcester Railway and opened on 17th May 1860. There was a proposed rail link to Diglis Locks from an adjoining viaduct but got no further than South Quay. 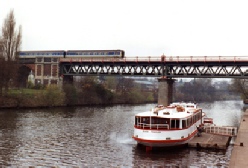 Construction began in 1769 and finished in 1781 at a cost of £30,000. The bridge has been rebuilt quite a few times since. In 1932 it was reopened by HRH Edward, Prince of Wales after a complete reconstruction.

Located downstream of Diglis Locks the bridge was built as part of the National Cycle Network.

The bridge forms part of the A422 Worcester Southern Bypass and was officially opened on 20th April 1985 by the Rt Hon Peter Walker MBE, MP, Secretary of State for Energy.

There have been many bridges on this site.

Construction began in June 1958 with a serious problem for contractors during times of flooding from the Severn. At times the construction site could be under 8 feet of water.

All photographs taken by Chris Witts unless otherwise indicated